Prospects Lie All the Time 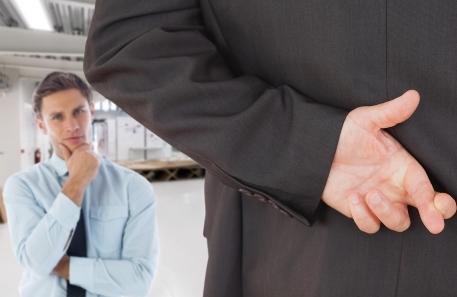 One of the classic selling rules David Sandler developed and shared with salespeople sounds a little harsh…but it’s true. Sandler warned us that “All prospects lie all the time.”

Maybe that sounds combative, but if we were to tweak the rule just a bit, we could see past that and understand what Sandler was getting at. Suppose we were to say, “All prospects are protecting themselves all the time.” Would that be clearer? Sure, it would. If we step back, we’ll realize that the two formulations are saying exactly the same thing.

Very often, prospects don’t tell us the whole truth about their situation, especially at the very beginning of the relationship. Why is that? It’s probably because they are concerned that they’re going to be taken advantage of, and they’re waiting for evidence that they can trust us with the facts of everything that is going on in their world.

We need to understand that, so we can build up the trust. Don’t we expect the same of the salespeople who work with us? When we walk into a furniture store, with the clear intention of picking out a sofa, what do we say when the salesperson approaches us and asks, “Can I help you?” We say: “No thanks, just looking.” We’re doing a lot more than looking, but we don’t feel comfortable sharing that yet with the salesperson. Why not? Because there isn’t really any relationship to speak of. There’s no trust built up.

At other times, prospects don't even know what their real issue is, which means they can’t tell us what’s really going on. The problem is there, and you're both involved in discussions about it, and they’re taking part in those discussions with every good intention.

The challenge is that they’re saying is the real issue — but in reality, X is a symptom of Y, the real problem. Because you believed them, and trusted in their assessment, you got to work on fixing X. That means skipping over the root cause. It could have been a lot different if you had slowed things down, asked a few questions, and worked your process. But you didn’t. You assumed the prospect was telling you the truth.

In the medical industry if you're solving the wrong problems, and you jump to the wrong conclusions, that's called malpractice. In sales, it’s called losing an opportunity — and a
relationship — possibly forever! That’s too high a price to pay.

We want to be realistic, and a little skeptical, about everything we hear from prospects. We want to always be thinking, “I heard what they said, but I'm not sure that that's an accurate statement, because they either don’t really know what’s going on, or maybe because they’re protecting themselves. And we want to act accordingly, by confirming every important piece of information.

How to Overcome Prospecting Mistakes and Increase Your Sales Pipeline